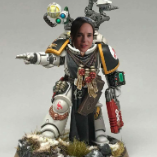 By Quen Deena,
August 16 in Appreciations