Lieutenant Elizabeth Snow - Summing It Up 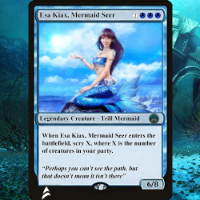 By Esa_Darkkdust
September 12, 2021 in Appreciations