arrow Lieutenant Junior Grade Chloe Waters: What is Nothing? 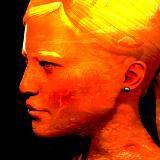 By Jana Zicv
August 3, 2020 in Appreciations