Lorian Lovar: A Pet for a Pet 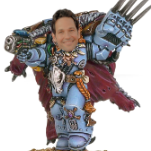