JP Lieutenant Commander Lael Rosek & Lieutenant German Galven: How We Say I Love You Part I 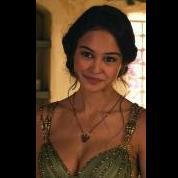 By LunarStar
March 4, 2019 in Appreciations