sep/oct Winner: Heritage of the Lost 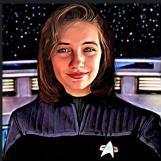